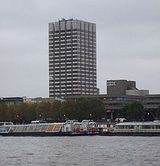 Description:
The London Studios (also known as The London Television Centre, LWT Studios or later as ITV Studios) is a television studio complex which is owned by London Weekend Television and has been home to the London Weekend ITV provider since 1972. It is in the heart of London and is situated on the South Bank next to the Royal National Theatre. The studios are the main studios for ITV, with most in-house programming split between The London Studios and Granada Studios in Manchester as of 2011.

When LWT succeeded ATV for the London weekend ITV franchise in 1968, it bought Associated-Rediffusion's old studios at Wembley (now known as The Fountain Studios). These studios were originally film studios and dated back from the 1920s. Although successfully converted for TV in the 1950s, the new LWT wanted its own, new, modern studios and so designs were soon drawn up.

The site for the development was chosen besides the new Royal National Theatre on the South Bank of the River Thames. It was purchased in 1969 and construction work, awarded to Higgs and Hill, commenced in 1970 with the centre opening for transmission in 1972, although it was not fully operational until 1974. It was originally called The South Bank Television Centre (a name that lasted until the early 1990s) and at the time was the most advanced television centre in Europe.