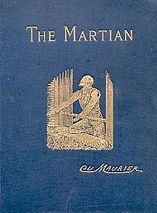 Description:
The Martian, by George du Maurier, published in 1898 (UK edition) is a long (471 pages), largely autobiographical, novel that describes the lives of two bosom friends, Barty Josselin and Robert Maurice, starting from their school days in Paris in the 1850s. Written in long descriptive passages with very little dialogue and many digressions, the book had considerably less success in its time than its predecessor, the popular Trilby.

Of a rather loose construction, its main points of interest lie for today's readers in lively descriptions of "la vie de bohême" and different parts of Paris through the second half of the 19th century, pages on Mechelen in Belgium and Whitby in the 1870s, and its superb illustrations.

As in Trilby, we find the recurrent theme of antisemitism, but less prominently than in the earlier work. What is new in it is the use of Swedenborgianism. Du Maurier writes that, <blockquote>to the most sceptical he has restored that absolute conviction of an indestructible germ of Immortality within us, born of remembrance made perfect and complete after dissolution: he alone has built the golden bridge in the middle of which science and faith can shake hands. (p.&nbsp;385)</blockquote>

In fact the "Martian" of the title is none other than an entity that undergoes successive reincarnations ad infinitum. This concept is linked to contemporary interest in eugenics. This theme is explored in...
Read More