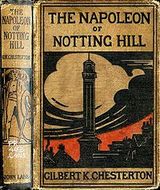 The Napoleon Of Notting Hill

The Napoleon of Notting Hill

Description:
The Napoleon of Notting Hill is a novel written by G. K. Chesterton in 1904, set in a nearly unchanged London in 1984.

Although the novel is set in the future, it is, in effect, set in an 'alternate reality' of Chesterton's own period, with no advances in technology or changes in the class system or attitudes. It postulates an impersonal government, not described in any detail, but apparently content to operate through a figurehead king, randomly chosen.

The dreary succession of randomly selected Kings of England is broken up when Auberon Quin, who cares for nothing but a good joke, is chosen. To amuse himself, he institutes elaborate costumes for the provosts of the districts of London. All are bored by the King's antics except for one earnest young man who takes the cry for regional pride seriously&nbsp;– Adam Wayne, the eponymous Napoleon of Notting Hill.

While the novel is humorous (one instance has the King sitting on top of an omnibus and speaking to it as to a horse: "Forward, my beauty, my Arab," he said, patting the omnibus encouragingly, "fleetest of all thy bounding tribe"), it is also an adventure story. Chesterton is not afraid to let blood be drawn in his battles, fought with sword and halberd in the London streets between neighboring boroughs; Wayne thinks up some ingenious strategies, and Chesterton does not shrink from the death in combat of some of his characters. Finally, the novel is philosophical, contemplating the...
Read More