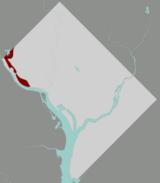 For other uses, see Palisade .

The Palisades is a neighborhood in Washington, D.C., along the Potomac River, running roughly from the edge of the Georgetown University campus (at Foxhall Road) to the D.C.-Maryland boundary (near Delacarlia Treatment Plant). MacArthur Boulevard (once called Conduit Road) is the main thoroughfare that passes through The Palisades.

In 1893, this sub-division was laid out by the Palisades Improvement Company. The Palisades had the Great Falls Electric Railway that ran from 36th and Prospect streets out to Glen Echo.

The International Athletic Park and Amusement Company secured a large block of the Palisades and constructed a Bicycle Track and General Amusement Park which opened on Decoration Day in 1896.

Also encompassed within The Palisades is the neighborhood of Potomac Heights which is bounded by Loughboro Road at the north end, Arizona Avenue at the south end and MacArthur Boulevard and the Potomac River.

In June 1909, the Potomac Heights Land Co. (based in N.C.) acquired previously known as the Athletic Park tract at the reported cost of $1000 an acre. The tract extends parallel with and between Conduit Road and the Potomac. It is divided by the Washington Railway and Electric Company which ran from Georgetown to Glen Echo for a 5 cent fare. There were 800 lots at $450–$500 per lot and no home was to be erected at less than $2500.

The Palisades is part of Advisory Neighborhood Commission 3D in Ward 3, the far northwest corner of the......
Read More