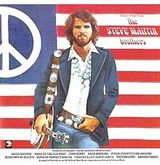 This was the only album on which he brought in other writers to help him with his material, including Saturday Night Live writer Jack Handey. When this album was released, he announced that he intended to never perform stand-up comedy again.

Despite its poor reception, the album was nominated in 1982 for a Grammy Award for Best Comedy Album.

1. American Photography
2. A Scientific Question
3. What I Believe
4. A Show Biz Moment