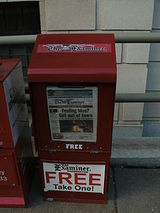 Description:
The Washington Examiner is a free daily newspaper published in Springfield, Virginia, and distributed in the Washington, D.C. metropolitan area. It is owned by Denver billionaire Philip Anschutz.

The newspaper was formerly distributed only in the suburbs of Washington, under the titles of Montgomery Journal, Prince George's Journal, and Northern Virginia Journal. Anschutz purchased their parent company, Journal Newspapers Inc., in October 2004. On February 1, 2005, the paper's name changed to the Washington Examiner, and it adopted a logo and format similar to that of another newspaper owned by Anschutz, the San Francisco Examiner. The Examiner's parent company, Clarity Media Group, also owns the conservative opinion magazine The Weekly Standard.

The newspaper is supported entirely by advertisements and is distributed in the Washington, DC, area. The paper is available at most Washington Metro subway stations. It is delivered to 300,000 houses on Thursdays and 250,000 on Sundays. It is printed in a "compact" format, also known as a tabloid format. The Examiner covers world, national, and local news and sports. The Examiner's executive editor is Stephen G. Smith. The newspaper employs staff writers, news services, syndicated writers, and freelance writers.

In the past, some people complained of difficulty unsubscribing from the paper, despite in...
Read More