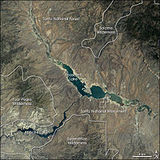 Roosevelt Lake is the oldest of the six reservoirs constructed and operated by the Salt River Project. It also has the largest storage capacity of the SRP lakes with the ability to store of water when the conservation limit of Roosevelt Dam is reached. When the dam is in flood-control mode, the lake can store of water; however, the U.S. Army Corps of Engineers requires all water over the conservation limit to be released from the lake within 20 days.

Roosevelt Lake is located in central Arizona almost entirely within Gila County although a...
Read More