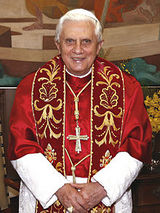 Description:
The theology of Pope Benedict XVI, due to the short pontificate so far, consists mainly of three encyclical letters on love (2005), hope (2007), and "charity in truth" (2009), as well as apostolic documents and various speeches and interviews. As Pope, Benedict XVI has wider responsibilities than previously. Therefore, it remains to be seen how the pontificate of Pope Benedict XVI will develop theologically.

The theology of Joseph Cardinal Ratzinger underwent developments over the years, many of which were characterized by his leadership position in the Congregation for the Doctrine of the Faith, which is entrusted with preserving the Catholic faith in its entirety. His theology originated in the view that God speaks to us through the Church today and not just through the Bible. The Bible is not a natural science textbook, but rather it is the essential testimonial of God’s revelation. One cannot get from it a scientific explanation of how the world arose; one can only glean religious experience from it. Thus Scripture would not wish to inform us about how the different species of plant life gradually appeared or how the sun and the moon and the stars were established. Its purpose ultimately would be to say one thing: God created the world.Cardinal Joseph Ratzinger, "In the Beginning...": A Catholic Understanding of the Story of Creation and the Fall (Michigan: Wm. B. Erdmans Publishing Co.. 1995), P. 5.

The world is not a chaos of...
Read More