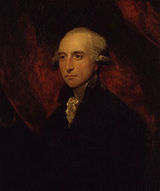 Description:
Thomas William Coke, 1st Earl of Leicester (6 May 1754 – 30 June 1842), known as Coke of Norfolk, was a British politician and agricultural reformer. Born to Wenman Coke, Member of Parliament (MP) for Derby and his wife Elizabeth, Coke was educated at several schools, including Eton College, before undertaking a Grand Tour of Europe. After returning to Britain and being married, Coke's father died, leaving him the owner of a 30,000 acre Norfolk estate. Returned to Parliament in 1776 for Norfolk, Coke became a close friend of Charles James Fox, and joined his Eton schoolmate William Windham in his support of the American colonists during the American Revolutionary War. As a supporter of Fox, Coke was one of the MPs who lost their seats in the 1784 general election, and he returned to Norfolk to work on farming, hunting, and the maintenance and expansion of Holkham Hall, his ancestral home.

Coke was again returned to Parliament in 1790, sitting continuously until 1832, and he primarily spoke on matters of local interest, such as the Corn Laws. His second focus was on civil liberties, and he spoke out against the government's response to the Peterloo Massacre and similar events. Described as the "greatest commoner in England", he chose the passage of the Great Reform Act 1832 as the moment to retire, later being made the Earl of Leicester in July 1837. After a short illness, Coke died on 30 June 1842, and was succeeded as Earl by his son...
Read More