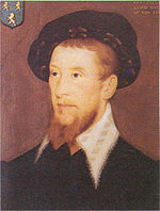 Description:
Thomas Fiennes, 9th Baron Dacre (ca. 1515 &ndash; 1541) was an English aristocrat notable for his conviction and execution for murder.

Dacre was the son of Sir Thomas Fiennes and Jane Sutton daughter of Edward Sutton, 2nd Baron Dudley. When his father died in 1528 he became heir apparent to his grandfather's title and the family seat at Herstmonceux Castle in Sussex, and he succeeded to the title at the age of approximately 19 in 1533. In 1536 he married Mary Nevill, daughter of George Nevill, 5th Baron Bergavenny.

He was a member of the jury at the trial of Anne Boleyn in 1536, and of Thomas, Lord Darcy, and John, Lord Hussey in May 1537 (for their part in the Pilgrimage of Grace), and of Baron Montagu and the Marquess of Exeter in 1538 for the Exeter Conspiracy.

On 30 April 1541 Dacre led a party of gentlemen including his brother-in-law John Mantell, John Frowds, George Roidon, Thomas Isleie, and two yeomen Richard Middleton and John Goldwell, to poach on the lands of Sir Nicholas Pelham of Laughton. During the escapade they encountered John Busbrig (or Busbridge), James Busbrig, and Richard Summer who were servants of Pelham. The encounter turned into an affray during which John Busbrig was fatally wounded. Dacre and several others were charged with murder and arraigned before the Lord High Steward, Lord Audley of Walden on 27 June. Dacre originally entered a plea of not guilty but was later persuaded to change it to guilty and throw himself upon the King's mercy in...
Read More