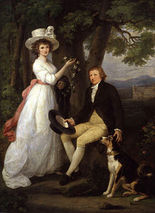 Description:
Thomas Jenkins (ca. 1722–1798) was a British antiquary and minor painter who went to Rome accompanying the English landscape painter Richard Wilson about 1750 and remained behind, establishing himself in the city by serving as cicerone and sometime banker to the visiting British, becoming a dealer in Roman sculpture and antiquities to a largely British clientele and an agent for gentlemen who wished a portrait or portrait bust as a memento of the Grand Tour.Brinsley Ford, "Thomas Jenkins, banker, dealer and unofficial English agent" Apollo 99 (1974) pp 416ff.

Jenkins' often unpleasantly self-serving maneuvers to keep artists in Rome from direct contact with visiting potential clients appear like a leitmotiv in the series of letters written from Rome and Tivoli in 1758 by the artist Jonathan Skelton, slandered as a "Jacobite" by Jenkins.Brinsley Ford, "The letters of Jonathan Skelton written from Rome and Tivoli in 1758" Walpole Society 36 (1956-58), Among the antiquities that passed through his hands, often improved by Roman sculpture restorers like Bartolomeo Cavaceppi, was the Discobolus discovered in Hadrian's Villa, which Jenkins sold to Charles Townley: the Townley Discobolus is in the British Museum. Jenkins also exported paintings to London.T. Ashby, Thomas Jenkins in Rome (Papers of the British School at Rome, 6.8 , pp 487-511. Jenkins was also instrumental in the...
Read More