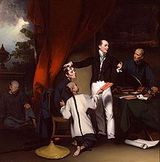 Description:
Thomas Richardson Colledge (1796 – 28 October 1879) was a Scottish surgeon with the East India Company at Guangzhou (Canton) who served part-time as the first medical missionary in China. In 1837 he founded and served as the first president of the Medical Missionary Society of China.

Colledge was born in 1796, and received his medical education under Sir Astley Cooper. He practised in Canton and Macau and some other Chinese ports, first under the Hon. East India Company, and then under the crown, and was superintending surgeon of the Hospitals for British Seamen.

During his residence in Canton and Macau he originated the first infirmary for the indigent Chinese, which was called after him, Colledge's Ophthalmic Hospital. He was also the founder, in 1837, of the Medical Missionary Society in China, and continued to be president of that society to the time of his death. On the abolition of the office of surgeon to the consulate at Canton in May 1841, and his consequent return to England, deep regret was expressed by the whole community, European and native, and a memorial of his services was addressed to her majesty by the Portuguese of the settlement of Macau, which caused Lord Palmerston to settle on him an annuity from the civil list. Before he left Asia, Colledge mentored an American surgeon, Peter Parker, who became the first full-time medical missionary to the Chinese.