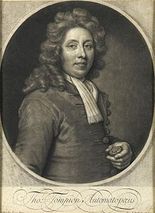 Description:
Thomas Tompion (1639&ndash;1713) was an English clock maker, watchmaker and mechanician who is still regarded to this day as the Father of English Clockmaking. Tompion's work includes some of the most historic and important clocks and watches in the world and can command very high prices whenever outstanding examples appear at auction. A plaque commemorates the house he shared on Fleet Street with his equally famous pupil and successor George Graham.

Thomas Tompion was born around 1639 and was baptized on 25 July 1639 in Northill, Bedfordshire, England. The Worshipful Company of Clockmakers maintains the family cottage in Ickwell, his home village. He was the eldest son of a blacksmith, also named Thomas Tompion, and probably worked as a blacksmith until 1664 when he became an apprentice of a London clockmaker. Very little of his earlier years is known. The first reference to Tompion in London is recorded around the end of 1670 in Water Lane (now Whitefriars...
Read More