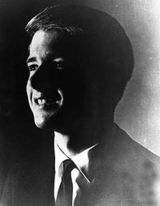 Description:
Thomas William Bennett (April 7, 1947 – February 11, 1969) was a U.S. Army medic and the second conscientious objector to receive the Medal of Honor (Desmond Doss, a medic in World War II, was the first). Bennett was killed in action during the Vietnam War and posthumous received the Medal of Honor.

Born in Morgantown, West Virginia, Thomas W. Bennett was sociable and deeply religious. While a student at West Virginia University, he formed the Campus Ecumenical Council during his freshman year.

When he was placed on academic probation after the Fall 1967 semester, he considered his options should he lose his academic deferment. Deeply patriotic, but opposed to killing on religious grounds, he opted to enlist as a conscientious objector who was willing to serve. This classification is different from a conscientious objector who will not assist the military in any way. He was trained as a field medic.

Cpl. Thomas W. Bennett arrived in South Vietnam on January 1, 1969, and was assigned to Bravo Company, 1st Battalion, 14th Infantry in the Central Highlands of Vietnam. The unit began a series of strenuous patrols in the dense, mountainous terrain. On February 9, 1969, the unit came under intense fire, and Cpl. Bennett risked gunfire to pull at least five wounded men to safety. That evening, his platoon sergeant recommended him for the Silver Star.

Over the coming days, Cpl. Bennett repeatedly put himself in harm's way to tend to the wounded. On February 11, while...
Read More