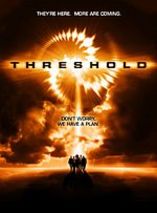 Description:
Threshold was a science fiction drama television series that first aired on CBS in September 2005. Produced by Brannon Braga, David S. Goyer and David Heyman, the series focuses on a secret government project investigating the first contact with an extraterrestrial species.

The series was first shown on Friday nights, but was moved to Tuesday in an effort to boost ratings. This plan backfired, with the show registering a sharp drop in its ratings on its first Tuesday night showing on November 22, 2005, and CBS canceled the series on November 23, 2005, with four episodes left unaired.

The remaining episodes were aired on Sky1, a channel in the United Kingdom owned by Sky, who co-produced the series with CBS. The entire series was released on DVD on August 22, 2006.

The series first aired on the Sci Fi Channel on Friday, October 13, 2006, at 10:00 pm, following a new episode of Battlestar Galactica.

The series stars Carla Gugino as Dr. Molly Caffrey, a high-level government crisis management consultant from the Blackwood Institute whose job is to create contingency plans for use in emergencies ranging from natural disasters to nuclear war. In order to have "all bases covered", one of her plans, code-named Threshold, is developed for dealing with the unlikely eventuality of first contact with aliens. One night, the crew of a U.S. naval vessel encounters a UFO. Many crew members subsequently die horribly, but some escape. After the ship...
Read More