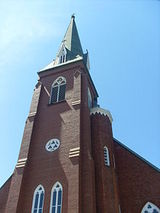 Tignish is a fishing community located in western Prince County, Prince Edward Island, Canada. It is located approximately NW of the city of Summerside, and NW of Charlottetown. With a town population of approximately 1,000, plus around 700 in surrounding localities, Tignish is considered by the government to be a "village", which is one level higher than a locality, one level lower than a town, and two levels lower than a city.

Tignish was founded in the late 1790s by nine founding francophone Acadian families, with further immigrants (mostly Irish) arriving in the 19th century and settling mostly in the nearby smaller locality of Anglo–Tignish (meaning "English Tignish"). Many of Tignish residents today are either of Acadian or Irish heritage.

One of the community's most popular and defining structures is the local Catholic church, St. Simon & St. Jude Catholic Church, which was among the first major structures built in Tignish, constructed between 1857 and 1860.

Fishing is one of the most important aspects of daily life and employment in Tignish, with many local families depending on this venue for income. There are currently three functioning harbors located in the Tignish area: the Tignish harbor, the Skinner's Pond harbor, and the Seacow Pond harbor.

Among the businesses in Tignish include the Tignish Heritage Inn, which was a convent from 1867 through...
Read More