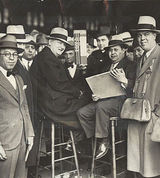 Mara was born into poverty on New York's Lower East Side. At the age of 13, he quit school in order to find work to support his mother. His first job was as an usher in a theater. He then worked as a newsboy selling newspapers on the streets. This job brought him into contact with many of New York’s bookmakers (or bookies), which was a legal business at the time. He soon became a runner for the bookies, earning five percent of the bets he collected and receiving tips from winners when he delivered their cash. By age 18, he was an established bookmaker himself.

Formation of the Giants

In 1925, the NFL was in need of a franchise in large city market, that could be used to showcase the league. NFL President, Joseph Carr traveled to New York to offer boxing promoter Billy Gibson, a franchise. Gibson, the former owner of the NFL's last New York Franchise, the New York Brickley Giants, refused the offer. However he referred Carr to his friend, Tim...
Read More