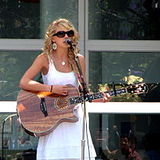 Description:
"Tim McGraw" is a song recorded by American singer-songwriter Taylor Swift. The song was written by Swift and Liz Rose, and produced by Nathan Chapman. It was released on June 19, 2006 by Big Machine Records as Swift's debut single and the lead single from Swift's eponymous debut album, Taylor Swift. Swift wrote "Tim McGraw" during her freshman year of high school, knowing that she and her senior boyfriend, Brandon Borello, would break up at the end of the year when he left for college. The song was written about all the different things that would remind Borello of Swift and their time spent together, once he departed. "Tim McGraw" is musical interconnection of traditional and modern country music. Lyrically, the track lists items in order to associate a past relationship, one of them being country artist Tim McGraw's music.

The song was received with critical praise from music critics who complimented Swift's vocal delivery. Some critics described it as tender, while others admired its professionalism. "Tim McGraw" performed well commercially. The track spent numerous of weeks upon both the Billboard Hot 100 and Hot Country Songs in the United States. It peaked at number forty on the prior and number six on the latter. The single was certified platinum by the Recording Industry Association of America (RIAA) and has sold more than one million copies since its release. The accompanying music video for "Tim McGraw", directed by...
Read More