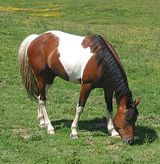 Description:
Tobiano is a spotted color pattern commonly seen in Pinto horses, produced by a dominant gene. The tobiano gene produces white-haired, pink-skinned patches on a base coat color. The coloration is present from birth and does not change throughout the horse's lifetime, unless the horse also carries the gray gene. (see below)

Other spotting patterns seen in Pinto horses include overo and the sabino markings. In the United Kingdom, Tobianos are frequently referred to as "Coloured" or as Piebald (black and white) or Skewbald (white and any base color other than black). However, Bay and white horses are also referred to as Tri-Coloured.

Tobiano traits generally include the following:

Tobiano is a dominant gene. from Veterinary Genetics Laboratory, School of Veterinary Medicine, University of California, Davis. Web Site accessed January 12, 2008 Therefore, one parent must be a tobiano for the...
Read More