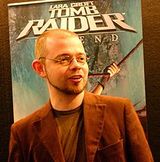 Originally employed at Core Design, he designed the original Tomb Raider video game in 1995 along with the character Lara Croft. His work on the game included building and animating most of the game's characters (including Lara), animating the in-game cutscenes, storyboarding the FMVs, and managing the level designers. Core gave Gard creative control over the game, although it was clear they wanted to market Lara's sex appeal, even asking Gard to implement a nude code into the game which he refused to do., David Jenkins, October 23, 1998 at Gamasutra

Gard left Core Design in 1997. With Tomb Raider already an established hit, Core was no longer giving Gard the creative freedom he originally had. In the end he was given the choice of making a Tomb Raider port for the Nintendo 64, or...
Read More