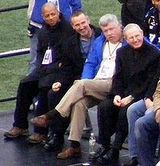 Description:
Thomas Richard Coughlin (born August 31, 1946) is an American football coach who is currently head coach for the New York Giants of the National Football League (NFL). Coughlin has led the Giants to victory in Super Bowl XLII. Coughlin was also the inaugural head coach of the Jacksonville Jaguars, serving from 1995–2002 and leading the team to two AFC Championship Games. Prior to his professional football career he was head coach of the Boston College Eagles football team from 1991–1993, and served in a variety of coaching and administrative positions in college football.

Coughlin was born in Waterloo, New York. He attended Waterloo High School, and was a good student and a letterman in football. While attending Waterloo, he gained the school's single season touchdown record-which still stands at 19. In Coughlin's senior year, he passed an entry test for seminary school to become a Catholic priest.

Coughlin attended Syracuse University, where he played running back for the Syracuse Orange football team. He was teammates with Larry Csonka and Floyd Little. In 1967, he set the school's single-season pass receiving record.

Coughlin was mentored by Bill Parcells while Coughlin was wide receivers coach and Parcells was head coach for the New York Giants. Like his mentor, Coughlin is known as a stern disciplinarian and for his meticulous attention to detail (for example, at the start of his Giants tenure he fined players...
Read More