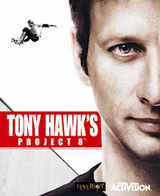 Description:
Tony Hawk's Project 8, officially abbreviated as THP8, is the eighth installment in the Tony Hawk series of video games. It was released on sixth-generation (PlayStation 2 and Xbox) and seventh-generation consoles (Xbox 360 and PlayStation 3). The name Project 8 refers to the Project 8 competition featured in the storyline, and because it is the eighth game in the Tony Hawk series.

Project 8 features one giant streaming city to skate in (only on the PlayStation 3 and Xbox 360), which contains various skate parks and "hidden sections". An E3 preview by a member of the PlanetTonyHawk.com staff stated "The levels are massive and an amalgamation of just about every level in the early THPS games. So Suburbia, School, Downtown and Factory (I, II and III) are all interconnected and part of the same town." There are about 45 skaters in the game, including unlockable characters, who each have a unique mo-cap style (only on the PlayStation 3 and Xbox 360), providing a different experience and no recycled animations.

One new feature is the 'nail the trick' option. When a player enters this mode the camera will zoom in on the side to focus on the skateboard and the character's feet. Players will then be able to use the right analog stick to control the right and left feet using the right and left analog sticks, allowing the player to flip and rotate the board in any such...
Read More