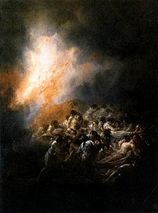 Description:
Torture Squad is a Brazilian death/thrash metal band, founded in 1990 which has released six studio albums and one live album. The band released their newest album, Aequilibrium, in 2010.

Three years after being founded in 1990, the band entered a more professional phase, in a line-up with founder Cristiano Fusco on guitar, Wagner "Castor" on bass, Amilcar Christofaro on drums, and Vitor Rodrigues as frontman and singer. They started touring in and around São Paulo and soon recorded a demo, released in 1993, A Soul in Hell. Their first CD was Shivering (1995); their break-through came with Asylum of Shadows (1999).

Their 2001 album, The Unholy Spell, came right after the band's first tour in Germany.In 2002, Cristiano Fusco left the band, and the band hired Mauricio Nogueira (a seasoned studio musician who played for Krisiun as well as other local bands like In Hell and Zoltar), and went on their first Brazilian tour.

Pandemonium produced by Marcello Pompeu and Heros Trench (Korzus) was released in 2003. The CD was supported by a TV video clip for "Pandemonium" and "Horror and Torture." Again, the band played all over Brazil. Then, in 2006 Torture Squad embarked on a European tour, headlining in 16 towns in Germany and 4 in Austria. Afterward they played in more cities in Brazil until they participated in the Brazilian pre-selection for the famed Wacken Open Air festival. They eventually won the final in São...
Read More