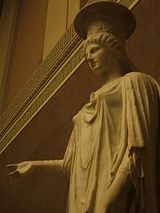 Description:
The Townley Caryatid is a 7.25m high Pentelic marble caryatid, depicting a woman dressed to take part in religious rites (possibly fertility rites related to Demeter or Ceres, due to the cereal motifs on her modius headdress).

It dates to the Roman era, between 140 and 160 AD, and is in the Neo Attic style adapted from 5th century BC Athenian workmanship. It is one of a group of five surviving caryatids found on the same site, arranged to form a colonnade in a religious sanctuary built on land fronting on the Via Appia owned by Regilla, wife of the Greek magnate and philosopher Herodes Atticus. This sanctuary was probably dedicated to Demeter. A fragmentary caryatid from the series, now in the Villa Albani, Rome, is signed by otherwise-unknown Athenian sculptors Kriton and Nikolaos