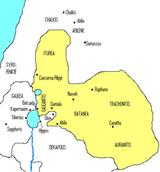 Description:
Trachonitis was a region that once formed part of Herod Philip's tetrarchy. It now lies within the boundaries of modern Syria.

It appears in the Bible only in the phrase tes Itouraias kai Trachbnitidos choras, literally, "of the Iturean and Trachonian region" (Luke 3:1). Trachonitis signifies the land associated with the trachon, "a rugged stony tract." There are two volcanic districts south and east of Damascus, to which the Greeks applied this name: that to the Northwest of the mountain of Bashan (Jebel ed-Druze) is now called el-Leja', "the refuge" or "asylum."

It lies in the midst of an arable and pastoral country; and although it could never have supported a large population, it has probably always been inhabited.

The other is away to the Northeast of the mountain, and is called in Arabic es-Safa. This covers much the larger area. It is a wild and inhospitable desert tract, remote from the dwellings of men. It was well known to the ancients; but there was nothing to attract even a sparse population to its dark and forbidding rocks, burning under the suns of the wilderness. It therefore plays no part in the history.

These are the two Trachons of Strabo (xvi.2, 20). They are entirely volcanic in origin, consisting of lava belched forth by volcanoes that have been extinct for ages. In cooling, the lava has split up and crumbled into the most weird and fantastic forms. The average elevation of these districts above the surrounding...
Read More