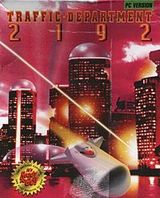 Description:
Traffic Department 2192 is a top down shooter game for IBM PC, developed by P-Squared Productions and released in 1994 by Safari Software and distributed by Epic MegaGames. The full game contains three episodes (Alpha, Beta, Gamma), each with twenty missions, in which the player pilots a "hoverskid" about a war-torn city to complete certain mission objectives. After publisher Safari Software was absorbed into Epic, the game was sold via Epic Classics for a time. The game was released as freeware under the Creative Commons Attribution-NoDerivs 3.0 License in 2007.

The player takes on the role of Lieutenant Marta Louise Velasquez, a hot-tempered young pilot working for the Traffic Department in the city of Vulthaven, on the planet Seche, in the year 2192. Since the vile gang known as the Vultures began attempts to take over the planet, the Traffic Department has become the only law-enforcement in the city. As the game's introduction explains, fourteen years earlier, Velasquez saw her father Ric killed by the Vultures while returning from garrison duty.

The story deals with Velasquez's aggressive attitude towards everybody she meets, apparently caused by the painful memory of her father. Intertwined is a complex science fiction story of cloning, mind control and cybernetics, combined with a classic tale of betrayal, infiltration, and warfare.

The game was scored...
Read More