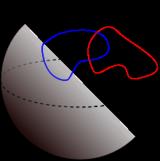 Description:
In mathematics, transversality is a notion that describes how spaces can intersect; transversality can be seen as the "opposite" of tangency, and plays a role in general position. It formalizes the idea of a generic intersection in differential topology. It is defined by considering the linearizations of the intersecting spaces at the points of intersection.

In particular, this means that transverse submanifolds of complementary dimension intersect in isolated points (i.e., a 0-manifold). If both submanifolds and the ambient manifold are oriented, their intersection is...
Read More