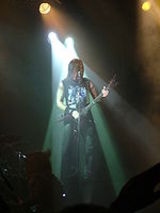 Description:
Trivium <!-- Note: This article is written in US English, which treats collective nouns as singular. (i.e. Trivium IS a band.) -->is<!-- Please do not change this to "are", it will be reverted back quickly.--> an American <!-- Please reach consensus on the talk page before changing the genre of the band -->metal<!-- "metal" is used as a generic term to cover the various genres they can be classed as. --> band from Orlando, Florida, formed in 1999. Signed to Roadrunner Records, the band has released four studio albums, eleven singles, and twelve music videos. Their latest album, Shogun was released on September 30, 2008. They are currently expected to release their fifth studio album entitled In Waves on August 9, 2011.

At his Lake Brantley High School talent show, guitarist Matt Heafy performed a cover version of "Self Esteem" by The Offspring. Vocalist Brad Lewter noticed Heafy and asked him to try out for his band. The pair went over to drummer Travis Smith's house where they played Metallica's "For Whom the Bell Tolls". Impressed with Heafy's performance, they accepted him into the band known as Trivium. After several shows at bars and local clubs, Lewter quit the band and Heafy took over his position as vocalist. In early...
Read More