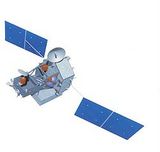 Description:
The Tropical Rainfall Measuring Mission (TRMM) is a joint space mission between NASA and the Japan Aerospace Exploration Agency (JAXA) designed to monitor and study tropical rainfall. The term refers to both the mission itself and the satellite that the mission uses to collect data. TRMM is part of NASA's Mission to Planet Earth, a long-term, coordinated research effort to study the Earth as a global system. The satellite was launched on November 27, 1997 from the Tanegashima Space Center in Tanegashima, Japan.

Instruments aboard the TRMM

The Precipitation Radar is the first spaceborne instrument designed to provide three-dimensional maps of storm structure. The measurements yield information on the intensity and distribution of the rain, on the rain type, on the storm depth and on the height at which the snow melts into rain. The estimates of the heat released into the atmosphere at different heights based on these measurements can be used to improve models of the global atmospheric circulation.

The TRMM Microwave Imager (TMI) is a passive microwave sensor designed to provide quantitative rainfall information over a wide swath under the TRMM satellite. By carefully measuring the minute amounts of microwave energy emitted by the Earth and its atmosphere, TMI will be able to quantify the water vapor, the cloud water, and the rainfall intensity in the atmosphere. It is a relatively small instrument that consumes...
Read More