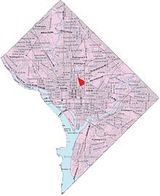 Description:
Truxton Circle is a trapezoid shaped neighborhood of Northwest Washington, D.C., bordered by New Jersey Avenue to the west, Florida Avenue to the north, New York Avenue to the South, and North Capitol Street to the East. Politically, it is partially in Ward 5. It is bordered on the north by Bloomingdale and LeDroit Park, to the east by Eckington, to the west by Shaw, and the south by the NOMA developmental zone. Named for a traffic circle that was demolished in 1947, the neighborhood is reclaiming its identity after decades of being presumed nameless.

The old traffic circle was constructed about 1900 at the intersection of Florida Avenue and North Capitol Street, centered on a large and ornate fountain built as a monument to Navy Commodore Thomas Truxtun. The circle, which saw more than its share of traffic jams and accidents, was demolished in 1947. As the circle slipped into history, so did the identity of the predominantly African American neighborhood. It was sometimes lumped in with Shaw, or mistaken for Eckington to the north, or called by the dubious name of "Florida Park," but most residents considered it nameless.