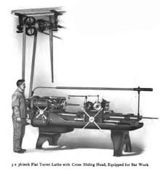 Description:
The turret lathe is a form of metalworking lathe that is used for repetitive production of duplicate parts, which by the nature of their cutting process are usually interchangeable. It evolved from earlier lathes with the addition of the turret, which is an indexable toolholder that allows multiple cutting operations to be performed, each with a different cutting tool, in easy, rapid succession, with no need for the operator to perform setup tasks in between, such as installing or uninstalling tools, nor to control the toolpath. The latter is due to the toolpath's being controlled by the machine, either in jig-like fashion, via the mechanical limits placed on it by the turret's slide and stops, or via electronically-directed servomechanisms for computer numerical control (CNC) lathes.

Types of turret lathes, and their nomenclature

There are many variants of the turret lathe. They can be most generally classified by size (small, medium, or large); method of control (manual, automated mechanically, or automated via computer (numerical control (NC) or computer numerical control (CNC)); and bed orientation (horizontal or vertical).

The archetypical turret lathe, and the first in order of historical appearance, is the horizontal-bed, manual turret lathe. The term "turret lathe" without further qualification is still understood to refer to this type. The formative decades for this class of machine...
Read More