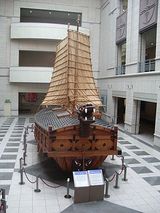 Description:
The Turtle ship, also known as Geobukseon or Kobukson (거북선), was a type of large warship belonging to the Panokseon class in Korea that was used intermittently by the Royal Korean Navy during the Joseon Dynasty from the early 15th century up until the 19th century.

The first references to older, first generation turtle ships, known as Gwiseon (귀선), come from 1413 and 1415 records in the Annals of the Joseon Dynasty, which mention a mock battle between a gwiseon and a Japanese warship. However, these early turtle ships soon fell out of use as Korea’s naval preparedness decreased during a long period of relative peace.Hawley, Samuel: The Imjin War. Japan's Sixteenth-Century Invasion of Korea and Attempt to Conquer China, The Royal Asiatic Society, Korea Branch, Seoul 2005, ISBN 89-954424-2-5, p.192

Turtle ships participated in numerous victories against Japanese naval forces that supported Toyotomi Hideyoshi's attempts to conquer Korea from 1592-1598, inflicting heavy losses. However, their historical role may have been exaggerated since "the entire Korean fleet probably did not have more than half a dozen turtleboats in action at any one time". Korean admiral Yi Sun-sin is credited with designing the ship. His turtle ships were equipped with at least five different types of cannon. Their most distinguishable feature was a dragon-shaped head at the bow...
Read More