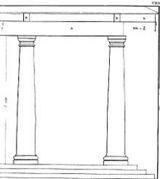 Description:
Among canon of classical orders of classical architecture, the Tuscan order's place is due to the influence of the Italian Sebastiano Serlio, who meticulously described the five orders including a "Tuscan order", "the solidest and least ornate", in his fourth book of Regole generalii di Architettura... sopra le cinque maniere<!--maniere in original--> degli edifici... (1537). Though Fra Giocondo had attempted a first illustration of a Tuscan capital in his printed edition of Vitruvius (1511), he showed the capital with an egg and dart enrichment that belonged to the Roman Doric order. The "most rustic" Tuscan order of Serlio was later carefully delineated by Andrea Palladio. From the perspective of these writers, the Tuscan order was an older primitive Italic architectural form, predating the Greek Doric and Ionic, associated by Serlio with the practice of rustication and the architectural practice of Tuscany.James S. Ackerman, "The Tuscan/Rustic Order: A Study in the Metaphorical Language of Architecture", Journal of the Society of Architectural Historians 42.1 (March 1983:15-34). Giorgio Vasari made a valid argument for this claim by reference to il Cronaca's graduated rustication on the facade of Palazzo Strozzi, Florence. Like all architectural theory of the Renaissance,...
Read More