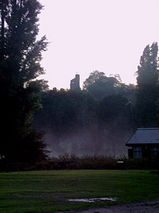 Description:
Tutbury is a large village and civil parish of about 3,000 residents in the English county of Staffordshire.

It is surrounded by the agricultural countryside of both Staffordshire and Derbyshire. The site has been inhabited for over 3000 years, with Iron Age defensive ditches encircling the main defensive hill, upon which now stands ruins of a Norman castle. These ditches can be seen most clearly at The Park pale and at the top of the steep hills behind Park Lane.The name Tutbury probably derives from a Scandinavian settler and subsequent chief of the hill-fort, Totta, bury being a corruption of burh the Anglo-Saxon name for 'fortified place'.It is 5 miles north of Burton upon Trent and 20 miles south of the Peak District.

Quarries near Tutbury once produced alabaster which was used in the carving of Nottingham Alabaster.

Until 2006, Tutbury Crystal, a manufacturer of high-quality cut glass products, was based in the village--however production transferred to Stoke-on-Trent as the existing factory was very old and was thought to be too small for the modern company's requirements. The old factory was demolished and apartments are built on the site, but a factory shop still operates in the village however. Despite this, the tourism trade survives thanks to the long and distinguished history of the Norman Priory Church and medieval Tutbury Castle where Mary, Queen of Scots, was once imprisoned.

Tutbury Castle became the headquarters of Henry de Ferrers and was the centre of the......
Read More