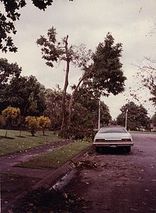 An area of convection was detected on November 15 near Ponape. The disturbance was moving northward and then westward as a cluster of thunderstorms. Because of the strong outflow from nearby Typhoon Hazen, the disturbance never was able to strengthen further. When Hazen moved off to the west, the tropical system was able to re-organize itself as a central circulation was defined on radar and satellite readings. On November 17, a Hurricane Hunter aircraft detected 35&nbsp;mph (56&nbsp;km/h) winds, which upgraded the disturbance to Tropical Depression 26W. 26W continued to move westward where it further strengthened and became Tropical Storm Irma as it bypassed Guam to the north on November 19.