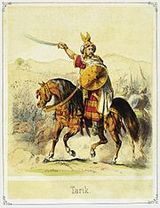 Description:
The Umayyad conquest of Hispania is the Islamic Ummayad Caliphate's conquest, between 711 and 718, of the Christian Visigothic Kingdom of Hispania, centered in the Iberian Peninsula.

The conquest began with an invasion by an army that (according to traditional accounts) consisted largely of Berber Northwest Africans and was commanded by Tariq ibn Ziyad. They disembarked in early 711 at Gibraltar and campaigned their way northward. After a decisive battle, the Visigothic kingdom collapsed and over the following decade most of the Iberian Peninsula was brought under Muslim occupation, save for mountainous areas in the north-west (Galicia, Asturias) and northern mountainous areas of little interest for the newcomers. The conquered territory, under the Arabic name al-Andalus, became part of the expanding Umayyad empire.

The invaders subsequently moved north-east across the Pyrenees only to engage in battle with Odo the Great´s Aquitanians in Toulouse, where the Muslim advance ground temporarily to a halt. However, they resumed their advance north by the west, defeating independent duke Odo in Bordeaux. Charles Martel was at the time the Frankish mayor of the palace and Odo saw no choice but to seek his help, pledge allegiance to him and join the Frankish military forces, who defeated the Muslims at the Battle of Tours (Poitiers) in 732. Muslim control of territory in what became France was intermittent and ended in 759.

Though Muslim armies dominated the Iberian Peninsula for...
Read More