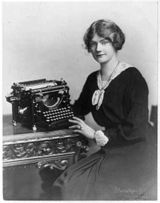 From 1874 the Underwood family made typewriter ribbon and carbon paper, and were among a number of firms who produced these goods for Remington. When Remington decided to start producing ribbons themselves, the Underwoods decided to get into the business of manufacturing typewriters.

The original Underwood typewriter was invented by German-American Franz Xaver Wagner, who showed it to entrepreneur John Thomas Underwood. Underwood supported Wagner and bought the company, recognising the importance of the machine. Underwood No. 1 and No. 2s, made between 1896 and 1900, had "Wagner Typewriter Co." printed on the back.

When the company was in its heyday as the world's largest typewriter manufacturer, its factory at Hartford, Connecticut was turning out typewriters at the rate of one each minute.

Underwood started adding addition and subtraction devices to their typewriters in about 1910.

In the years before World War II, Underwood built the world's largest type writer in an attempt to promote itself. The typewriter was on display at Garden Pier in Atlantic City, New Jersey for several years and attracted large crowds. Often, Underwood would have a young woman sitting on each of the large keys....
Read More