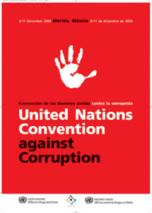 Description:
The United Nations Convention against Corruption (UNCAC) is the first legally binding international anti-corruption instrument. In its 8 Chapters and 71 Articles, the UNCAC obliges its States Parties to implement a wide and detailed range of anti-corruption measures affecting their laws, institutions and practices. These measures aim to promote the prevention, criminalization and law enforcement, international cooperation, asset recovery, technical assistance and information exchange, and mechanisms for implementation.

Signatures, Ratifications and Entry into Force

The UNCAC was adopted by the United Nations General Assembly in Mérida, Yucatán, Mexico, on 31 October 2003 by Resolution 58/4. The convention was signed by 140 countries. Ecuador became the thirtieth country to ratify the Convention on 15 September 2005, and in accordance with Article 68 (1) of Resolution 58/4, it entered into force on 14 December 2005. As of 15 May 2011, the convention had been ratified, accepted, approved or acceded to by 151 countries (which became thus States Parties to the convention) as well as the European Union and applies to most of the world population. The countries with a population of over 1 million, that had of 15 May 2011 not ratified were:

The UNCAC is the most recent of a long series of developments in which experts and politicians have recognized the far-reaching impact of corruption and the need to develop effective...
Read More