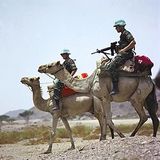 Description:
Peacekeeping by the United Nations is a role held by the Department of Peacekeeping Operations as "a unique and dynamic instrument developed by the Organization as a way to help countries torn by conflict create the conditions for lasting peace". It is distinguished from both peacebuilding and peacemaking.

Peacekeepers monitor and observe peace processes in post-conflict areas and assist ex-combatants in implementing the peace agreements they may have signed. Such assistance comes in many forms, including confidence-building measures, power-sharing arrangements, electoral support, strengthening the rule of law, and economic and social development. Accordingly UN peacekeepers (often referred to as Blue Beret because of their light blue berets or helmets) can include soldiers, police officers, and civilian personnel.

Most of these operations are established and implemented by the United Nations itself, with troops serving under UN operational control. In these cases, peacekeepers remain members of their respective armed forces, and do not constitute an independent "UN army", as the UN does not have such a force. In cases where direct UN involvement is...
Read More