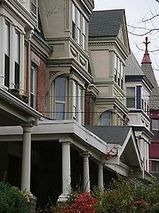 The eastern side of University City is home to the Penn and Drexel campuses, several medical institutions, independent centers of scientific research, 30th Street Station, and the Cira Centre. The western side, with its Victorian and early 20th-century housing stock, is primarily residential and is home to an ethnically and economically diverse population.

University City's boundaries, as defined by the non-profit University City District organization and the City of Philadelphia, are the Schuylkill River to the east; Spring Garden Street, Powelton Avenue, and Market Street to the north; 52nd Street to the west; and Woodland Avenue, University Avenue, and Civic Center Boulevard to the south. Within these boundaries are the local neighborhoods of Cedar Park, Garden Court, Spruce Hill, Squirrel Hill, Powelton Village, Walnut Hill, and Woodland Terrace. The boundaries also encompass several historic districts and the ZIP codes 19104, 19139, and 19143.