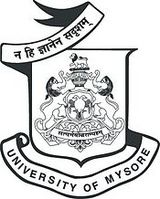 Description:
The University of Mysore (), is a public university in India. The University founded during the reign of Krishnaraja Wodeyar IV, the Maharaja of Mysore, and was conceptualized on the basis of a report on educational progress in the United States and Australia, submitted by Messrs Thomas Denham and C.R.Reddy who visited these countries respectively. The engineer-statesman Dewan, M.Visvesvarayya, is the person usually given credit for being instrumental in its founding. The university opened on 27 July 1916, and the the first chancellor was the Maharaja of Mysore. The University became the first outside the domain of the English administration in India, the sixth University in India as a whole, and the first ever University in Karnataka. It is a state University of the affiliating type, and became autonomous on 3rd March 1956, when it gained recognition from the University Grants Commission.

The University encompasses 122 affiliated colleges and 5 constituent colleges (forming an aggregate of 53,000 students). In addition, the University has 37 postgraduate departments, 8 specialised research & training centres and 2 postgraduate centres that together offer about 55 regular academic programmes to 3,500 students. It also runs a number of employment-oriented diploma courses and certificate programmes.

The Mysore University Library comprises over 800,000 books, 2,400 journal titles and 100,000 volumes of journals. The main campus features an...
Read More