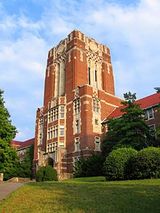 Description:
The University of Tennessee system (UT system) is one of two public university systems in the state of Tennessee. It consists of three primary campuses in Knoxville, Chattanooga and Martin, a health sciences campus in Memphis and a research institute in Tullahoma.

The University of Tennessee system has a combined student enrollment of more than 44,000 students, over 260,000 living alumni, and a total endowment of approximately $867 million.

That same year, the Tennessee state legislature gave UT permission to establish a campus in Chattanooga, which was the largest city in Tennessee without a public university. The private University of Chattanooga determined...
Read More