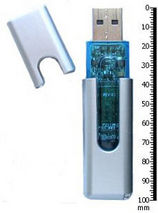 Description:
The USB mass storage device class, otherwise known as USB MSC or UMS, is a protocol that allows a Universal Serial Bus (USB) device to become accessible to a host computing device, to enable file transfers between the two. To the host device, the USB device appears similar to an external hard drive, enabling drag-and-drop file transfers.

The USB mass storage device class comprises a set of computing communications protocols defined by the USB Implementers Forum that run on the Universal Serial Bus. The standard provides an interface to a variety of storage devices.

Some of the devices that are connected to computers via this standard include:

Devices which support this standard are referred to as MSC (Mass Storage Class) devices. While MSC is the official abbreviation, UMS (Universal Mass Storage) has become common in online jargon.

Most current mainstream operating systems include support for USB mass storage devices, although support on older systems is usually available through patches.

There is no native (supplied by Microsoft) support for...
Read More