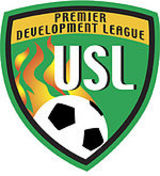 Description:
The USL Premier Development League (commonly known as the PDL) is the amateur league of the United Soccer Leagues in the United States, Canada, and Bermuda, forming part of the American Soccer Pyramid. It is currently the top level men's amateur soccer competition in the United States, and has 64 teams competing in four conferences, split into nine regional divisions; unofficially, it is considered to be the fourth tier of competition, behind Major League Soccer, the North American Soccer League and the USL Professional Division, and roughly equal with the National Premier Soccer League.

Portland Timbers U23's are the reigning PDL champions, having beaten Thunder Bay Chill 4-1 in the 2010 PDL Championship game on August 7, 2010.

While not strictly a "professional" league in the sense that the majority of players do not receive payment, the PDL prides itself on its professionalism in terms of its organization and the way the league is run, and its dedication to developing young soccer players, preparing them for future careers in professional leagues in the United States and elsewhere. As PDL seasons take place during the summer months, the player pool is drawn mainly from elite NCAA college soccer players seeking to continue playing high level soccer during their summer break, which they can do while still maintaining their college eligibility.