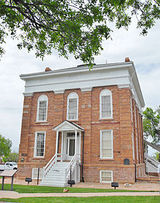 The Neoclassical revival, Corinthian style building was designed by architect Richard K. A. Kletting, and built between 1912-1916. The building was added to the National Register of Historic Places during 1978. Beginning during 2004 the capitol experienced a major restoration and renovation project. The project added two new buildings to the capitol complex, while restoring many of the capitol's public spaces to their original appearance. One of the largest projects during the renovation was the addition of a base isolation system which will allow the building to survive as much as a 7.3 magnitude earthquake. After completion of the renovations, the building was rededicated and resumed normal operation during January 2008.

The first Euro-American settlers arrived in what would become Utah on July 24, 1847 (which is now termed Pioneer Day in Utah). These settlers, Mormon pioneers directed by Brigham Young, appealed to the United States Congress for statehood during 1849, asking to become the State of Deseret. Their proposal was denied, but...
Read More