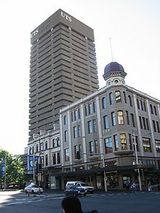 Description:
The University of Technology Sydney (UTS) Tower is located at 1 Broadway NSW, Australia. On more than one occasion it has been singled out as Sydney's ugliest building. For many UTS staff and students, this has become a matter of pride. The Tower has provoked beautification schemes from irate architects. It has inspired kitsch material culture in the form of Tower lapel pins and snow domes, both now sought-after objects, and has given rise to various stories about its design and construction. Another beautification scheme, suggested by the architecture company Laboratory for Visionary Architecture, involved covering the building with a lightweight composite mesh textile, which would be able to store rainwater, generate electricity and cool down the building, thus transforming it into a self-sufficient body.

The original 1964 plan provided for a row of seven twelve-storey buildings on the site. This was gradually modified. In 1965 it was to be four buildings of fifteen, twenty, nineteen and fourteen storeys. And by 1966, three buildings were planned of thirteen, twenty-two and sixteen storeys with two basements and five podium levels.The plan was to create an 'indoor campus' with all facilities being self-contained. An alternative interpretation of the Tower's rationale was provided by "Shoplift", a Student Association magazine. It alleged that the architects had been instructed to develop a building "in which students would not...
Read More