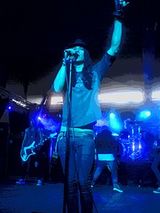 Description:
Vains of Jenna are a rock band formed in Falkenberg, Sweden during January 2005. They have since relocated to Los Angeles, California.they have released a cover of the song "Fuck You" by Cee Lo Green and will be performing around the States in support of that release with the help of and

Vains of Jenna was formed by four young people from Sweden. Their common influences include Mötley Crüe, Guns N' Roses, the Rolling Stones, Aerosmith, Nirvana, and Hanoi Rocks. At that time the two youngest members of the band were 18 years old. They were offered a chance to play at Cruefest Hollywood in January 2005. The band accepted and traveled to California for the show. Only one disc had been recorded at that time, a 4 song demo containing:

It was not until after Cruefest that they had a Manager or recorded with Gilby Clarke.

Vains of Jenna captured the attention of Stevie Rachelle, the owner of hard rock website Metal Sludge during their first performance in America playing at the Whisky a Go Go in Hollywood during the charity event Cruefest Hollywood! Rachelle became the band's manager. After touring the United Kingdom, the group relocated to California. The band toured coast to coast and in many cases were not old enough to play bars they were booked in which had a minimum age of 21. This would sometimes leave half the band in the van outside,...
Read More