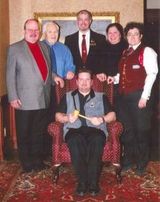 Description:
The Vancouver Magic Circle is the one of the world's largest I.B.M. Rings for professional and amateur magicians, with over 150 local and out-of-town members. It is Ring #92 of the International Brotherhood of Magicians and an affiliate of the Pacific Coast Association of Magicians. Members of the Vancouver Magic Circle meet each month at the Sunrise Community Hall at 7:00 pm, located at 1950 Windermere Street, Vancouver, BC. They meet on the fourth Thursday of every month with no meetings being held in July, August and December. Guests are welcomed, and many new members join the circle each year.

In the Spring of 1942, accomplished Vancouver Magicians and good friends Charles Howard and William Shelly brought together about a dozen Magic enthusiasts from around Vancouver to form The Vancouver Magic Circle. Monthly Meetings of the fledgling club were held at the Devonshire Hotel (corner of Georgia & Hornby) in downtown Vancouver.

Charles Howard, a retired Army Captain, Served as the club's First President, holding two terms of office (1942 and 1943). He was a respected authority on magic and the original visionary for our club. During his tenure he founded and nurtured the Vancouver Magic Circle Library, which was an integral part of club meetings in the 1940s and '50s. (Over time his Legacy has grown to become one of the largest Club Owned Magic Libraries in North America, with the collection today at well over 2000 volumes.)