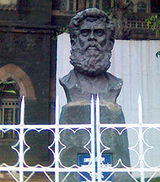 Description:
Vasudeo Balwant Phadke ( ) (4 November 1845 &ndash; 17 February 1883) was an Indian revolutionary and is widely regarded as the father of the armed struggle for India's independence. Phadke was moved by the plight of the farmer community during British Raj. Phadke believed that ‘Swaraj’ was the only remedy for their ills. With the help of Kolis, Bhils and Dhangars communities in Maharastra, Vasudev formed a revolutionary group called as Ramoshi. The group started an armed struggle to overthrow the British Raj. The group launched raids on rich English businessmen to obtain funds for their liberation struggle. Phadke came into limelight when he got control of the city of Pune for a few days when he caught the British soldiers off guard during one of his surprise attacks.

Vasudev was born on 1845-11-04 in Shirdhon village of Panvel taluka based in Raigad district in Maharashtra state in a Marathi Chitpavan Brahmin family. As a child Vasudev preferred learning skills like wrestling, riding over high school education and dropped out of school. Eventually he moved to Pune and took the job as a clerk with military accounts department in Pune for 15 years. Krantiveer Lahuji Vastad Salve a then prominent social figure based in Pune was the mentor of Vasudev. Lahuji Salve, an expert wrestler operated a gymnasium. Lahuji preached the importance of independence...
Read More