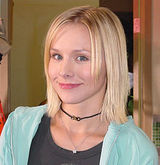 Description:
Veronica Mars is a fictional character in UPN/The CW the television series, Veronica Mars, which aired on the UPN and CW networks from 2004 to 2007. She is portrayed by Kristen Bell.

Background and details of plot

At the beginning of the series, Veronica is a 17-year-old junior at Neptune High in her hometown of Neptune, California. According to series creator Rob Thomas, Veronica's birthday is in August. Veronica has an after-school part time job working for her father, private investigator Keith Mars, the former sheriff of Balboa County, California. At this time in her life, Veronica does not have any friends until she meets and helps Wallace Fennel, who quickly becomes her best friend.

Back-story to season one

Veronica's story is told via voice-overs and flashbacks fitted into the main story. We learn that a year before the series picks up Veronica's story, Veronica had been a popular teen at Neptune High. Her best friend was popular junior Lilly Kane, and Veronica was dating Lilly's brother, Duncan Kane. Along with Lilly's boyfriend Logan Echolls, the four were at the forefront of the school's wealthy and popular "09er" clique (named after the 90909 zip code, a wealthy area of Neptune) that dominated Neptune High's social scene. Though Veronica did not meet the economic status of the other 09ers, she was accepted into the clique because she was dating Duncan, and because of her father's influence as sheriff.